When we design the report the parameters are copied from the contract class and the details for them are stored in the report parameters.

To get rid of the issue, delete all the parameters in the report design, and restore the dataset again. When the dataset is refreshed the required parameters are automatically added to the report.

X++ was designed in a way that the complications around null value are not required and hence X++ manages a default value always to ensure that null exceptions do not occur. The null can however occur when there is a view defined with outer joins.

The obvious option it to handle this using SQL and a computed column in views. However in my case the columns were far too many to created a computed column for each and hence i wanted to handle null in the x++ code itself. I wanted to check if the value of a field in the view in null and accordingly take an action to either copy or ignore it.

This error occurs when there is a parameter at the subnode (Dataset) level, which is  supposed to be mapped to report parameter; however, it does not map to one.

This can happen when we selected to have the Dynamics Filters = True for the dataset (which would create corresponding elements at the report level) and later deleted them from the report level, thus leaving the dataset level filters as orphan and without a matching filter. 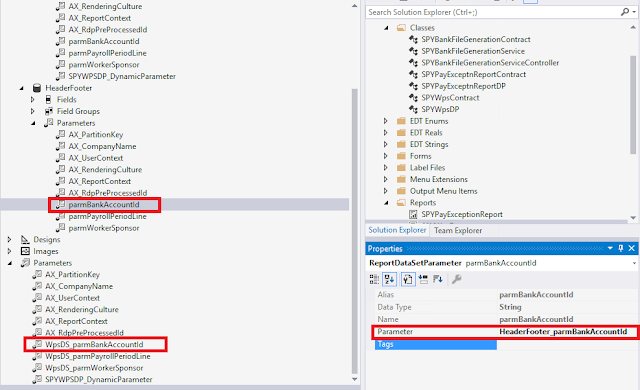 In the screen above we can see that the HeaderFooter dataset refers to a parameter called HeaderFooter_parmBankAccountId and this does not exist at the report level. We should map this to a valid report parameter if it exists, or we can set the dynamic filters to false and then true again so that these filters are created again if missing.

This issue can occur when a developer copies a report from an existing design and tries to make the changes to the dataset.

There are parameters passed between the AX system and SSRS framework and these need to be in Sync. The parameters are stored at 3 levels and it needs to be in Sync. Sometimes it can happen that due to the edits one makes these move out of Sync in such cases we have to manually fix it. 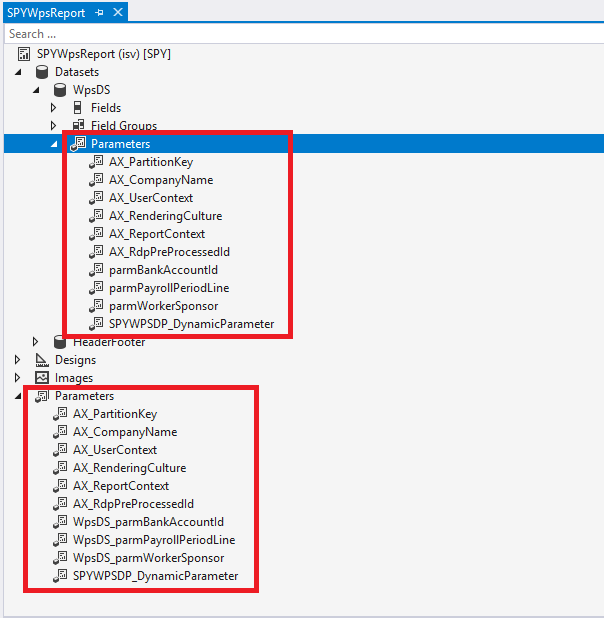 The other odd place where the parameters are saved is in the XML file and it can sometimes not be seen/referred on the screen. Hence to fix these we should open the report using an xml editor. Right click the report and choose to open with XML editor.

Once the xml editor is opened , one can see that there parameters referred in the XML file which do not exist on the dataset. These are from a previous dataset PromotionSalaryDS which now is probably removed and hence the mismatch.

We should manually delete these parameters to match the list as per the report parameters. 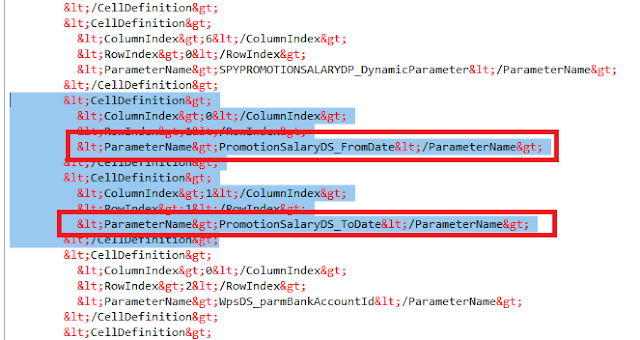 You will also have to delete the parameters if they are referred in the Parameter cell definition. Please ensure that you delete each xml block as a unit. One unit is highlighted below it starts with CellDefinition and ends with /CellDefinition 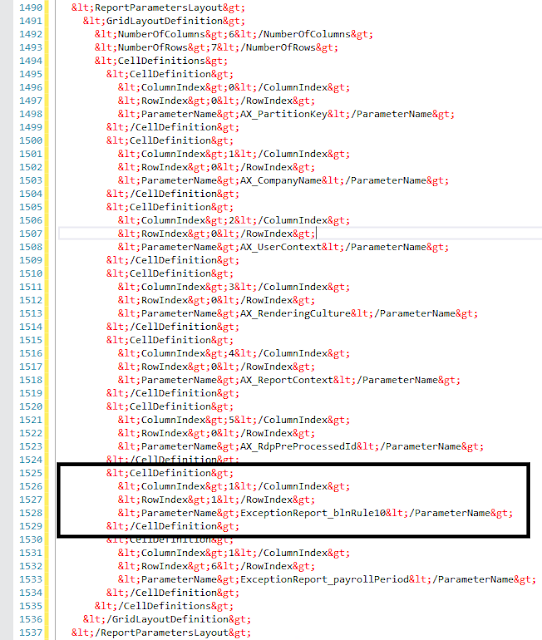 Something that is frequently required to debug SQL statement is the select query that is generated. To get the SQL statement associated with the x++ select

Use the generate only and forceliterals clause in the statement.

DateTime fields have some complexity added to them because these fields are stored in SQL server and are displayed in Dynamics as per the user timezone.

Because timezone is not stored along with the DateTime filed in SQL; Dynamics always assumes that the date is in UTC date time format and if it needs to be displayed to the user then it is convereted from that timezone to the user timezone by the dynamics framework.

This understanding is important when working with DateTime fields as the data that one might see in the SQL database might be different and that is because the framework is converting the time from the user timezone to UTC.

There are a lot of functions in the DateTimeUtil class to hanlde the different time conversion scenarios the important ones are :

There might be scenarios where you might want to export the data from Power BI to SQL server. In my case there were two dashboard where a certain value was not matching and i wanted to do a SQL query to figure out what was missing.

So with some research I found out that, Power BI uses SSAS services in the background to store and fetch data to and from the datamodel that is created. Power BI ships with the SSAS service "msmdsrv.exe" (found in bin folder of power bi installation) and an instance of this service is create for each power bi desktop session.

If we can access this instance we should also be able to import data from the same. We know that the service would be running on the localhost but what we dont know is the port at which it is running. To find the port number is a two step process:

Step 1: Find the ProcessID of the msmdsve.exe on the local server use the following command on an elevated command prompt. 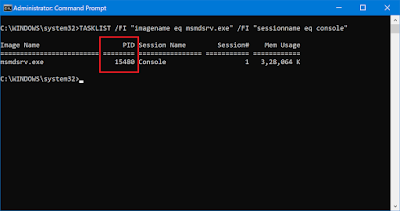 Now one needs to chose the PID and fetch the details of the process using the following command in an elevated command prompt: 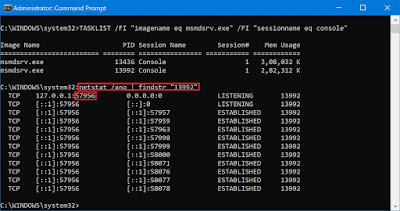 We have used PID 15480 from the first command and from the TCP responses the first line exposes the port number that is being used by the service.

Create a SSIS project in Visual Studio and drag the DataFlow task on the canvas as shown below. 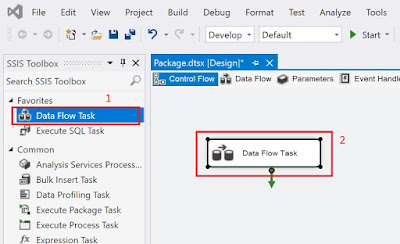 Right click the data flow task and choose edit. This should take us to the DataFlow tab from the control flow tab. In the dataflow tab select Source assitance and create a new connection to the local SSAS server that we figured out in the steps above 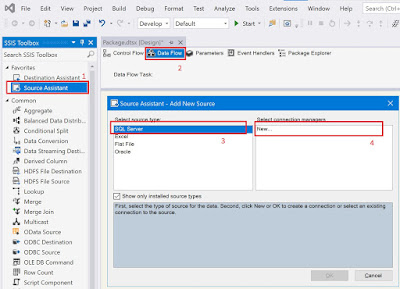 While creating the Connection make sure that you select the provider as OLE DB Provider for Analysis Server (as shown below). 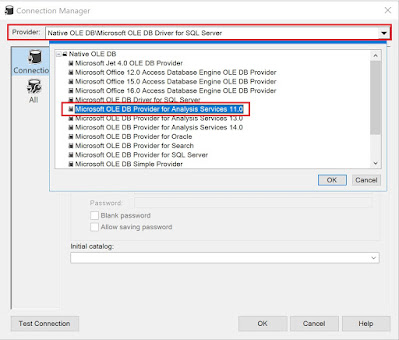 Use the server name details as discovered with NT authentication and just select the intial catalogue whcih is randomly generated. 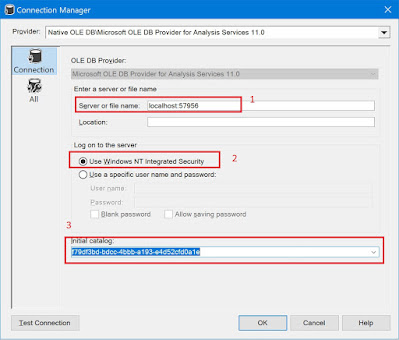 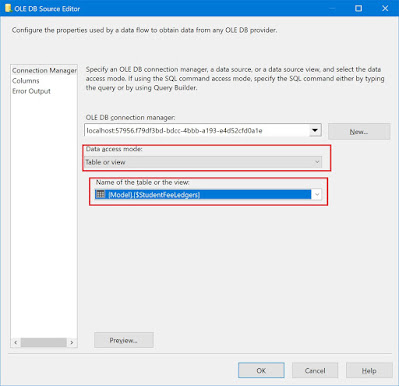 The SSIS package can now be executed to import the data. One issue that I have noticed with the above procedure is that the data type for the different columns is not correctly identified and a lot of the columns end up being imported as varchar(255) an alternate to this could be to format this data in excel file and then import from excel after formatting the columns there.
To import the data into excel we need to create a connection to the SSAS server with the same details as above.  The only trick that is required in this process is to treat the SSAS source as a table rather than a cube so that flat data can be imported.
When the connection to SSAS cube is created the connection is saved as a folder "C:\Users\santosh.singh\Documents\My Data Sources" (replace santosh.singh with the user name that you are logged in with). 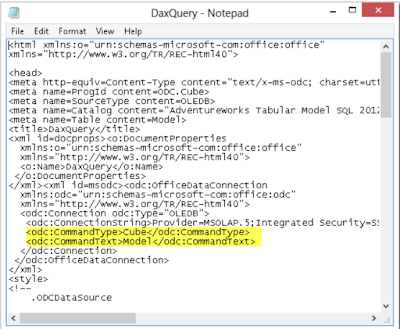 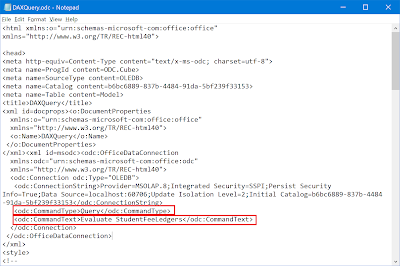 Once the above changes are done import the data using Excel and the data would appear as a flat table rather than a cube (Pivot). Once the import is done format the columns with the correct data type and then import the excel into SQL server using SSIS. 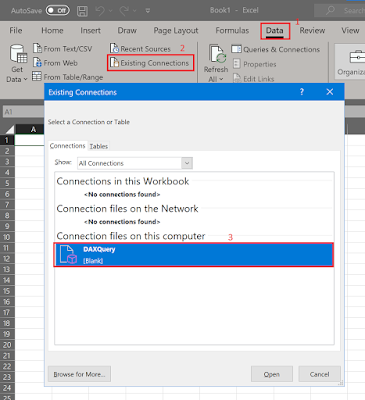 While testing a PowerBI report we realized that the data being presented is wrong due to some join issue. Its always easier to analyze the impact of an incorrect join when we have a access to SQL database. We are using Dynamics data in PowerBI using Odata entities. Hence in order to check the validity of the joins, it was desired to have the Data in SQL Server.

We decided to write an SSIS package to copy the data from Dynamics D365 to SQL Server. When we starting OData we received an error

We can resolve this using the below steps:

Install Microsoft .NET 4.6 and above on your computer and Enforce TLS 1.2 on your machine through registry settings.

In an elevated command prompt run the following commands:

Have started working on some integration pieces and it required clarity on the standards to be used. From the little research that I have done below is the understanding. For any interaction to happen between applications we need to have a handshake at two levels :-
The two popular standards that are used to access Web services (APIs) over http are
SOAP:
This is a full protocol. Its like an envelop which is added on top of the message. Because SOAP is an envelope the messages need to be packed and unpacked to and from the enveloped. The message is however formatted in XML.
REST:
Rest does not directly compare to SOAP as its not a protocol. Its like a postcard which is open and it is transferred over http protocol. Thus making it light and faster however less secure. The messages in REST standard are formatted as JSON.
Primary Use:
Primarily REST API are created for CRUD operations on data (tables) over internet. REST is focused on accessing named resources through a single consistent interface.
SOAP  focuses on exposing pieces of application logic (not data) as services. SOAP exposes operations. SOAP is focused on accessing named operations, each implement some business logic through different interfaces.
OData:
Odata is an implementation of REST APIs in a standard that further simplifies/ standardizes the process of handling the request and response headers, status codes, HTTP methods, URL conventions, media types, payload formats, query options, etc. when working with REST API calls.
WSDL:
WSDL is often used in combination with SOAP service. WSDL defines the service for the consumer and acts as a standard between the consumer and the provider.  It describes how to access a web service and what operations it will perform. A client program connecting to a web service can read the WSDL to determine what functions are available on the server this is also release to the developers to develop the interface with the service and enabling intellisense.
Posted by Santosh Singh No comments: