“System does not support setup 'continuous' of number sequence 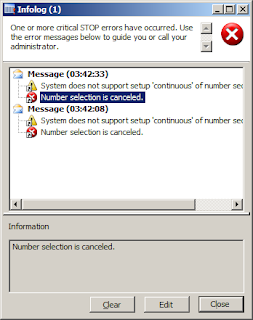 just got resolved by encapsulating the same within a transaction 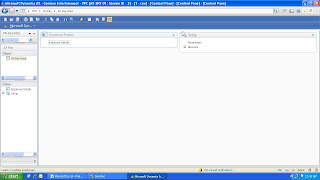 One of the methods of deploying customizations onto an AX installation is by carrying the aod files and replacing them on the target installation. However there is one issue with this approach if the newly updated aod file contains some new security and configuration keys the same would not get registered in the security metadeta of AX which i believe is stored in the database.

So we might land up with a menu with missing menu items as the security is not recognized for them even for the Administrator. 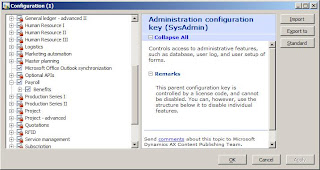 For a long time i wondered if string substitution is all that the macros offer for until i realized the power of macros when it comes to a programming language.

Macros are strings which are substituted by the pre-compiler before they reach the compiler and it is this behavior which makes macros extremely powerful.

Hence macro substitutes a string in the source code which is then compiled and processed by the compiler.

A classic example of this behavior is the pack unpack pattern applied in AX. It starts with the definition of a macro which refers to all the memory variables we need to maintain state for. The pack method returns a container effectively before this source reaches the compiler the macro is substituted and the container list contains all the memory variables which are processed by the compiler and the actual memory values are composed into the container.

similarly in the unpack method when we say
[version,#CurrentList] = _packedClass;
before the above statement is processed by the compiler the macro is substituted by all the memory variables which then get initialized as this statement is executed.


Ideally the source code written once should not be repeated elsewhere coz as per the best practices it should be reused however if for some reason a piece of code needs to be duplicated through a routine the macros are the ideal candidates to maintain a single central copy of this source.

MorphX has a built-in macro-preprocessor. The purpose of macros is to make statements easy to reuse and you can declare macros wherever you can write X++ statements.

There are basically three kinds of macros: macros in macro libraries, stand-alone macros and (local) macros inside methods. All three types of macros have identical syntax and functionality. The only differences are that

X++ has these macro constructs:

You can use the define macro construct to declare symbolic constants in your program as follows:

Macros are declared by this syntax:

Where text can be anything. Within the macro declaration, it is possible to use parameters. The parameters are named %1, %2, %3 etc. All macros are considered as text, and are unfolded before compilation. This means that there is no means of checking syntax or functionality within macros (all that appears is a compiler error in the macro with no specification of error location).

A local macro, called AnExample is declared as follows:

// Some statements or text

A more complex macro using parameters is declared as follows:

print “The first parameter is NOT empty, it is %1”;

You reference macros by their name prefixed with a hash mark (#). To reference the complex macro shown above, you would write:

The parameters (1-4) have a story: Parameter 1 is optional, as it is only used in the macro, if it exists (#IFNOT.EMPTY) whereas parameters 2, 3 and 4 are used unconditionally (in the statement %2 = %3 + %4) - and therefore must be included in the call. Assuming you have declared a variable called A, a valid reference would be):

Which would expand the macro into the statements below:

print “The first parameter is NOT empty, it is 1”;

The results of the above statements are two prints and an assignment.

A is assigned the value 7 and two lines are printed on the screen: “The first parameter is NOT empty, it is 1” and “Parameter1 has the value 1”.

If you referenced the complex macro without parameters 2-4, the result would have been:

And hence a compilation error occurs though you cannot see that the macro is actually expanded in this way (which makes the error harder to find).

To use a macro library, you must create the library (say TestMe) using the Application Object Tree and then load the macro using the following construct:

A more preferred way of referring macro libraries is using the #macrolib keyword the advantage of using this keyword is that you will be able to reference macors with special characters and multiple lines look at the example below where a special character (") doube quote had to be used in a macro
1. #define.TableRead(select * from EmplTable where EmplTable.EmplCode == %1;)
#TableRead("E0006")
info( emplTable.EmplCode );

1) Great businesses have a point of view, not just a product or service.

2) Writing a plan makes you feel in control of things you don’t actually control.

3) You have the most information when you’re doing something, not before you've done it.

4) Stuff that was impossible just a few years ago is simple today.

5) Failure is not a prerequisite for success.

6) Don’t make assumptions about how big you should be ahead of time.

7) Don’t sit around and wait for someone else to make the change you want to see.

8) When you build what you need, you can assess quality directly instead of by proxy.

9) Solving your own problem lets you fall in love with what you’re making.

10) What you do matters, not what you think or say or plan.

11) When you want something bad enough, you make the time.

12) The perfect time to start something never arrives.

14) You need a committment strategy, not an exit strategy.

16) Build half a product, not a half-assed product.

17) Getting to greatness starts by cutting out stuff that’s merely good.

18) The real world isn’t a place, it's an excuse. It's a justification for not trying.

19) The big picture is all you should be worrying about in the beginning. Ignore the details.

20) Decide. You’re as likely to make a great call today as you are tomorrow.

21) The longer it takes to develop, the less likely it is to launch.

22) It’s the stuff you leave out that matters.

23) Focus on substance, not fashion. Focus on what won't change.

24) When good enough gets the job done, go for it.

25) When you make tiny decisions, you can't make big mistakes.

26) Pour yourself into your product.

28) Better your customers grow out of your product, than never grow into them.

29) You can’t paint over a bad experience with good marketing.

31) Instead of out-spending your competitors, out-teach them.

32) Let customers look behind the curtain.

33) Leave the poetry in what you make, there is beauty in imperfection.

34) Marketing is not a department, it's the sum total of everything you do.

37) A business without a path to profit is a hobby.
Posted by Santosh Singh No comments:

Came across this amazing macro which would disable the password and make the columns selectable.

basically when this excel sheet was opened a new addin button is created which could be used to unlock the sheets.
Posted by Santosh Singh 1 comment: